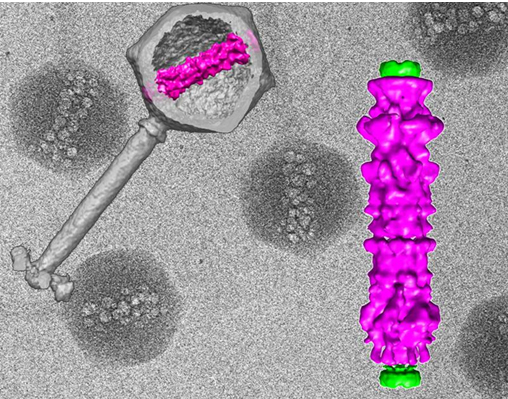 Since the discovery of the microscope, scientists have tried to visualize smaller and smaller structures to provide insights into the inner workings of human cells, bacteria and viruses. Now, researchers at the National Institute of Arthritis and Musculoskeletal and Skin Diseases (NIAMS), part of the National Institutes of Health, have developed a new way to see structures within viruses that were not clearly seen before. Their findings are reported in the Jan. 13 issue of Science.

Cryo-electron microscopy (cryo-EM) is a technique that allows scientists to image very small particles, like structures on the surface of viruses. This method has been useful in helping researchers understand how vaccines work. But, despite the success of cryo-EM, scientists have been unable to clearly visualize structures inside of viruses, because radiation is used to image them. "With lower doses of radiation, it is not possible to see inside the organism," said lead author Dr. Alasdair Steven of the NIAMS Laboratory of Structural Biology Research. "However, higher doses of radiation damage the virus, destroying the very structures that we would like to view."

Working in collaboration with the group of Dr. Lindsay Black at the University of Maryland Medical School, Baltimore, Steven and his team were able to turn the problem of radiation damage into an asset. Viruses, one of the simplest life forms, are made up of nucleic acids (DNA or RNA) and the proteins encoded by the nucleic acid instruction manual. The researchers realized that proteins inside the virus are more sensitive to damage than DNA.

Moving forward, the team members anticipate many uses of bubblegram imaging. Ideally, this technique will allow a better understanding of the inner workings of viruses, providing more opportunities for developing novel therapies. Beyond studying viral structure, cryo-EM could be used to visualize interactions of proteins with DNA in human cells. One exciting prospect lies in using this approach to visualize differences in cancer vs. non-cancer cells. "This new cryo-EM procedure renders previously invisible proteins visible and, thus, will provide new understanding of cell biology," said Steven.