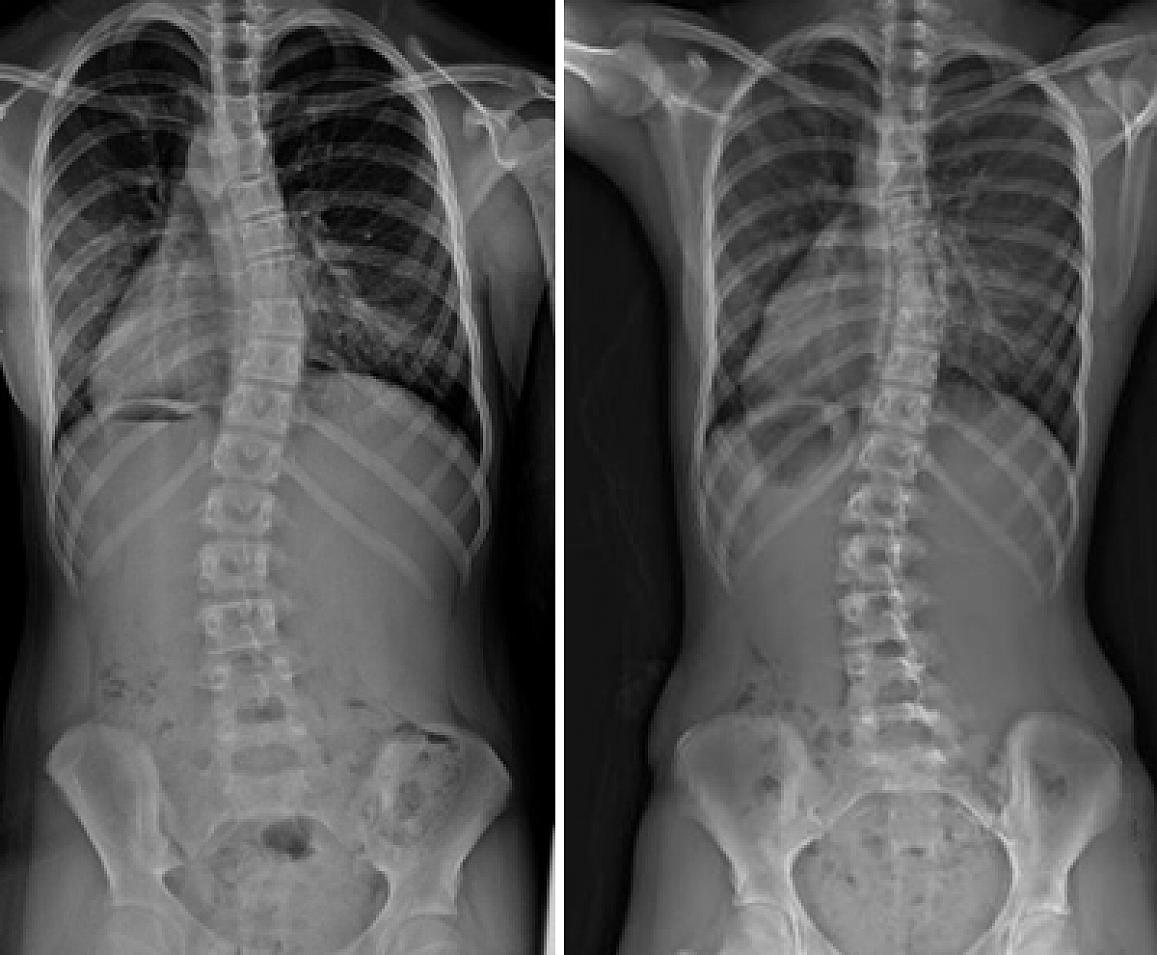 Before and after bracing x-rays of a girl with adolescent idiopathic scoliosis.

Bracing in adolescents with idiopathic scoliosis reduces the likelihood that the condition will progress to the point that surgery is needed, according to a study published online today in the New England Journal of Medicine. The work was supported by the National Institute of Arthritis and Musculoskeletal and Skin Diseases (NIAMS), part of the National Institutes of Health.

Adolescent idiopathic scoliosis (AIS) is a curvature of the spine with no clear underlying cause. In mild cases, monitoring over time by a physician may be all that is needed. However, in more severe cases — especially when the child is still growing — the use of a brace, or even surgery, may be recommended. Left untreated, more serious curves can cause pain and disability.

“While bracing has been a mainstay of non-operative treatment for AIS for decades, evidence regarding its impact has been inconclusive,” said NIAMS Director Stephen I. Katz, M.D., Ph.D. “This study is certain to enhance clinical decision-making regarding the non-operative management of AIS.”

Researchers from the Bracing in Adolescent Idiopathic Scoliosis Trial (BrAIST) set out to compare the risk of curve progression in adolescents with AIS who wore a brace with those who did not. The study team, led by Stuart Weinstein, M.D., and Lori Dolan, Ph.D., of the University of Iowa, Iowa City, recruited patients who — based on their age, skeletal immaturity and curve severity — were at high risk for continued worsening of their spinal curves.

Investigators enrolled 383 subjects at 25 institutions in the United States and Canada between March 2007 and February 2011. Although the study began as a completely randomized study, the team eventually added a preference cohort, where patients and families could choose their own treatment. Treatment was randomly assigned for about 40 percent of study participants and based on preference for the remainder.

Patients in the observation arm received no specific treatment, while those in the bracing arm were instructed to wear a brace for 18 hours per day. Treatment was considered to be unsuccessful when a curve progressed to 50 degrees or greater — a point at which surgery is typically recommended. Treatment was considered a success when the child reached skeletal maturity without this degree of curve progression.

In January 2013, the trial was stopped early after finding that bracing significantly reduced the risk of curve progression and the need for surgery, and that more hours of brace wear was associated with higher success rates. In the combined randomized and preference cohorts, 72 percent in the bracing group achieved success. Wearing a brace more than an average of 13 hours per day was associated with success rates of 90 to 93 percent. Of note is the fact that 48 percent of patients in the observation group, and 41 percent of patients in the bracing group who wore the brace infrequently, also had positive outcomes.

“This study presents important evidence addressing the fundamental question facing families and clinicians dealing with the diagnosis of AIS — to brace or not to brace,” said Weinstein. “Now we can say with confidence that bracing prevents the need for surgery.”

For more information on scoliosis in children and adolescents, visit our scoliosis health topic page.

The study was supported by the NIAMS/NIH under Award Numbers R21AR049587 and R01AR052113. Additional support was provided by the Shriners Hospitals for Children, the Canadian Institutes of Health Research, the University of Rochester, the Children’s Mercy Hospital and Clinics, and the Children’s Miracle Network.

The http://www.clinicaltrials.gov identifier for the Bracing in Adolescent Idiopathic Scoliosis Trial (BrAIST) is NCT00448448.