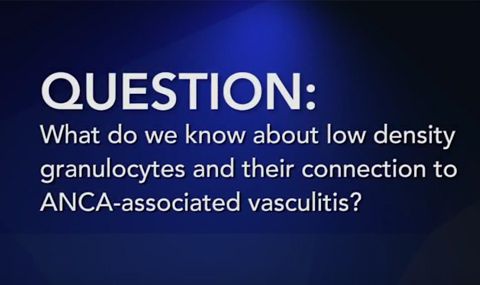 Scientists have discovered a potential biomarker for predicting which patients with a disease known as ANCA-associated vasculitis (AAV) are more likely to respond to treatment. The study was conducted by researchers at the National Institute of Arthritis and Musculoskeletal and Skin Diseases (NIAMS), in collaboration with the Immune Tolerance Network (sponsored by the NIH’s National Institute of Allergy and Infectious Diseases) and Vasculitis Clinical Research Consortium. The study was published in the journal Arthritis and Rheumatology.

AAV is a systemic autoimmune disease that causes inflammation in the blood vessels. There are few known biomarkers that can predict which patients with AAV will respond to what therapy, and none of these markers can reliably guide treatment decisions. Identifying biomarkers and novel therapeutic targets could help determine an individual’s treatment response and lead to more personalized medical decisions.

Peter Grayson, M.D., M.Sc., Head of the Vasculitis Translational Research Program in the NIAMS Intramural Research Program (IRP), and colleagues from both the NIAMS and several other institutions, conducted experiments using samples from the Rituximab in ANCA-Associated Vasculitis (RAVE) trial. The previously conducted RAVE trial compared the standard therapy for AAV—a combination of the chemotherapy drug cyclophosphamide plus the corticosteroid prednisone—with the biologic agent rituximab plus prednisone. Rituximab is sometimes used to treat cancer and rheumatoid arthritis or other autoimmune diseases. In each group, the goal was to induce remission and discontinue the use of the steroid medication. Rituximab was found to be as effective as the standard therapy in inducing disease remission. About half of all patients in both treatment groups reached disease remission after six months.

In this recent study, the researchers analyzed blood samples of a subset of patients. They concluded that a distinct group of neutrophils (a type of infection-fighting white blood cell) known as low density granulocytes (LDGs) were present in both those who responded to treatment and those who did not, but patients with higher levels of LDGs had more severe symptoms and were less likely to achieve disease remission. The researchers concluded that LDGs play a key role in the progression of the disease, and may affect treatment response. Future efforts will focus on further understanding the function of LDGs.

NIAMS researcher Peter Grayson, M.D., M.Sc., describes low-density granulocytes and how they are present in those with ANCA-associated vasculitis. They may predict outcomes and be targets for future therapies.

The study was supported by the NIAMS IRP, and by the NIH’s National Center for Advancing Translational Sciences through BU-CTSI Grant number KL2TR000158. It also was a project of the Immune Tolerance Network, sponsored by the NIH’s National Institute of Allergy and Infectious Diseases via contract N01AI15416, protocol number ITN-21AI. Dr. Grayson received support from a Rheumatology Scientist Development Award from the Research and Education Foundation of the American College of Rheumatology.