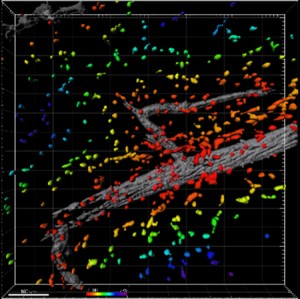 Edward A. Botchwey, Ph.D., Georgia Institute of Technology.
Credit Blood vessels (grey) expand and branch in areas where large numbers of anti-inflammatory monocytes (multi-colored dots) have been recruited by the signaling molecule, SDF-1α.

Using a combination of medicinal chemistry and biomaterials science, researchers have engineered a way to attract immune cells to a site of injury in mice and stimulate the formation of new blood vessels. The study, which was funded in part by the NIH’s National Institute of Arthritis and Musculoskeletal and Skin Diseases (NIAMS), suggests we might be able to leverage the body’s own responses for tissue repair and regeneration. The findings were published in Biomaterials.

Inflammation is an important part of the immune response and one of the body’s first reactions to injury. It causes redness, swelling and pain, but it also initiates the healing process by attracting immune cells that help quell infection and repair damaged tissue.

The repair of an injury relies on the formation of a network of blood vessels to carry oxygen and nutrients to the regenerating tissue. While the exact mechanisms by which this vascular network takes shape are unclear, scientists have known that it involves a biomolecule called SDF-1α. Earlier work suggested that SDF-1α recruits a type of immune cell called an anti-inflammatory monocyte, which in turn stimulates the expansion of blood vessels.

Based on these earlier findings, Edward A. Botchwey, Ph.D., of the Georgia Institute of Technology, wondered if SDF-1α could be used for therapeutic purposes in regenerative medicine. If scientists could find a way to use the molecule to promote blood vessel development, it might speed the repair of tissues damaged by events such as trauma, heart attacks or strokes. It may also enhance the success of tissue and organ transplantation surgeries.

As a first step toward this goal, Dr. Botchwey’s team engineered a biomaterial to use in delivering SDF-1α to a local area. By combining chemicals and biological molecules, they produced a substance called a hydrogel that had the required properties—it protected SDF-1α from degradation and released it slowly over a period of days.

To test the effect of SDF-1α on immune cell recruitment and blood vessel growth, the researchers affixed SDF-1α-loaded hydrogels to an area of skin on mice’s backs. After three days, they examined the area beneath the hydrogels and found higher numbers of anti-inflammatory monocytes compared to areas treated with control hydrogels lacking SDF-1α. In addition, the SDF-1α-treated regions showed evidence of expansion of the blood vessel network. Additional experiments showed that SDF-1α promotes this growth over an extended period lasting as long as seven days.

Although more research is needed, the results suggest that using SDF-1α to attract immune cells and promote blood vessel network growth in a localized area could stimulate the healing process upon injury.

"Establishing healthy circulation is critical for repair of damaged tissues following an event like a heart attack, or for the success of organ or tissue transplantation procedures," said Dr. Botchwey. "By enhancing one of the body’s own repair mechanisms, this type of approach has the potential to improve the healing process and perhaps save lives."