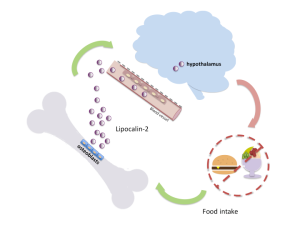 A hormone produced by bones suppresses appetite and weight gain in mice, according to investigators funded in part by the NIH’s National Institute of Arthritis and Musculoskeletal and Skin Diseases (NIAMS). The findings, which appeared in the journal Nature, reveal a new mechanism for controlling metabolism and may lead to novel approaches for treating obesity, diabetes and other metabolic disorders.

While the skeleton may seem like a static scaffold for the rest of the body, in fact, bones are continually remodeled and have multiple functions. In addition to their structural role, bones support blood cell production, store phosphorous and calcium, and even secrete hormones. In 2007, researchers discovered that bone cells called osteoblasts help control energy metabolism by producing a hormone called osteocalcin.

Finding osteocalcin’s function prompted scientists to wonder if bones secrete additional hormones. Other organs involved in regulating metabolism, such as the pancreas, usually do so through coordinated action of more than one hormone. The first clue to the identity of a second bone-derived hormone came from a study on the gene FOXO1 by Stavroula Kousteni, Ph.D., of Columbia University Medical Center. Her team of investigators found that disabling this gene in mouse osteoblasts improves energy metabolism, but only partially as a result of osteocalcin activation. This suggested that an additional mechanism acting downstream of FOXO1 must exist.

In the current study, Dr. Kousteni’s group continued to work on the FOXO1-deficient mice in search of the missing puzzle pieces. Their investigation revealed that osteoblasts in these mice produce an unusually high level of the hormone lipocalin 2 compared to their normal counterparts. Earlier studies suggested that this hormone is made by fat cells and is associated with obesity. But the researchers in this study showed that lipocalin 2 is primarily produced by osteoblasts and suppresses appetite and weight in both normal and obese mice.

They next showed that depletion of lipocalin 2 had the opposite effect. Mice engineered to lack osteoblast-derived lipocalin 2 consumed 16 percent more food and weighed 5 percent more than normal mice in a 12-week period. The lipocalin 2-deficient mice also exhibited signs of compromised glucose metabolism.

The investigators also demonstrated that in normal mice, feeding boosts osteoblast production of lipocalin 2, resulting in elevated levels of the hormone in the blood and suppression of appetite. Together, the results revealed that osteoblast-derived lipocalin 2 limits appetite and improves glucose balance in mice.

Additional experiments found that lipocalin 2 crosses the blood-brain barrier and stimulates a class of nerve cells in the hypothalamus, MC4R neurons, which are known to be involved in triggering appetite suppression.

This study demonstrates the importance of the skeleton in controlling energy metabolism, and may lead to insights into the underlying causes of some metabolic diseases.

“By uncovering a novel connection between bone physiology and energy metabolism, our work underscores the remarkable diversity of roles played by the skeleton in the body,” said Dr. Kousteni. “In addition, if lipocalin 2 has the same effect in humans as in mice, we may now have a tool to develop novel therapies for diseases characterized by dysregulation of appetite.”