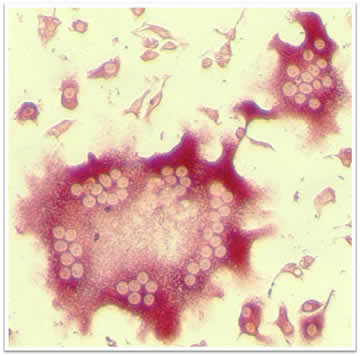 NIAMS scientists have found evidence that elevated numbers of osteoclasts, a type of cell that degrades bone, may contribute to bone loss in people with spondyloarthritis. Osteoclasts, like the one shown here in the center, contain multiple nuclei (clear circles) because they are formed by fusion of precursor cells. Credit: Robert A. Colbert, M.D., Ph.D., NIAMS.

In contrast to normal bones, the bones of people with spondyloarthritis become damaged and deformed, causing back and hip pain, as well as other symptoms. Now, scientists at the NIH’s National Institute of Arthritis and Musculoskeletal and Skin Diseases (NIAMS) have uncovered new clues as to how these bone abnormalities occur.

Spondyloarthritis usually strikes between the ages of 20 and 40, and it is more common in men than women. It causes inflammation of the joints between the spinal bones, as well as the joints that link the pelvis to the spine, causing pain and stiffness. With time, the spinal bones can fuse, resulting in loss of mobility. The disease also causes erosion of the spinal bones, which can weaken them and lead to fractures. Although there are currently no specific treatments for spondyloarthritis, the symptoms can be controlled with anti-inflammatory medicines and physical therapy.

The study, published in the journal Arthritis & Rheumatism, focuses on an immune protein called HLA-B27, a member of a class of molecules that helps immune cells recognize and destroy invading pathogens such as bacteria or viruses.

There are many different kinds of "HLA" molecules, and each person carries a unique set. Scientists have known for many years that people who carry HLA-B27 are more susceptible to spondyloarthritis, but they haven’t known why.

The NIAMS researchers, led by Robert A. Colbert, M.D., Ph.D., Chief of the Pediatric Translational Research Branch and Deputy Clinical Director at the Institute, set out to examine HLA-B27’s role in bone loss, a classic feature of the disease.

"Most people develop spondyloarthritis as adults, but close to 20 percent are first diagnosed as children," said Dr. Colbert. "Our goal is to better understand the underlying causes of the disease so that we can more quickly diagnose it and eventually develop better therapeutics to treat it."

To examine the role of HLA-B27 in bone loss, Dr. Colbert’s team treated rat bone marrow cells engineered to produce human HLA-B27 with an inflammatory molecule called TNF-alpha, which is elevated in people with spondyloarthritis. It contributes to the inflammation associated with the disease.

The researchers found that compared to normal cells, the engineered cells differentiated into two and a half times more osteoclasts, a type of cell that degrades bone.

"A rise in the number of osteoclasts could account, at least in part, for the bone degradation seen in people with spondyloarthritis," said Gerlinde Layh-Schmitt, Ph.D., a staff scientist at NIAMS and lead author of the paper.

But how does HLA-B27 contribute to osteoclast formation?

A clue came from the researchers’ observation that TNF-alpha also caused the HLA-B27-containing cells to boost their production of HLA-B27. They already knew that HLA-B27 had the tendency to "misfold" and adopt an abnormal shape during its production in the cell. The elevated levels of the protein in TNF-alpha-treated cells could cause the misshapen proteins to tangle and clump together.

Contending with these tangles places stress on the cell, especially on the endoplasmic reticulum (ER), the compartment where proteins destined for the cell surface, like HLA-B27, are folded, processed and exported. It was possible that the cell’s response to this stress triggered changes that led to osteoclast formation.

As expected, the researchers found evidence of stress on the ER in the TNF-alpha-treated cells. They noticed an accumulation of misfolded HLA-B27 and an unusually high level of a molecule that works to unscramble tangled proteins.

From these results, the researchers concluded that misfolding of HLA-B27 sets off a cascade of events that can ultimately lead to bone loss. TNF-alpha, which is elevated in people with spondyloarthritis, increases the production of HLA-B27, a protein that is prone to misfolding. Elevated levels of misshapen HLA-B27 place stress on the ER, the compartment where the protein undergoes the folding process. ER stress then triggers a boost in production of IL-1-alpha, a molecule that stimulates the creation of osteoclasts. In people, these additional osteoclasts would likely lead to bone degradation and weakening, common features of spondyloarthritis.

"We’ve known since the 1970’s that HLA-B27 is a genetic susceptibility factor for spondyloarthritis, but its role has been elusive," said Dr. Colbert. "This study is significant because it’s among the first that links HLA-B27 to a bone abnormality commonly seen in people with the disease."

Further studies on the underlying mechanisms of bone loss could lead to novel, targeted therapies for the disease.