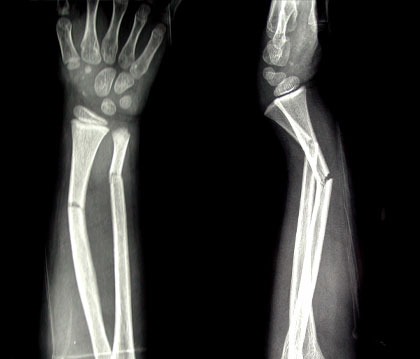 Children who break their forearm after just a mild trauma may have underlying bone health conditions, according to recent research funded in part by the National Institutes of Health’s National Institute of Arthritis and Musculoskeletal and Skin Diseases, and published in the Journal of Bone and Mineral Research.

Optimal bone development is dependent on a complex interplay of genetic, hormonal, environmental, and behavioral factors. Although there is some evidence that childhood fractures may suggest skeletal fragility, it is also possible that these fractures are simply a consequence of energetic childhood activities. In addition, previous studies examining the potential association between fractures and skeletal properties have relied on traditional dual energy X-ray absorptiometry (DXA) technology, which measures bone density, an indicator of bone strength. These studies have not been able to determine a clear relationship between breaks and overall bone health.

In this investigation, Sundeep Khosla, M.D., of the Mayo Clinic, and colleagues used a powerful new technology called high-resolution peripheral quantitative computed tomography (HRpQCT), which, unlike DXA, can assess other indicators of bone strength, like quality and structure. They examined 115 children ages 8 to 15 who had sustained a distal forearm fracture (DFF). About half of the breaks resulted from mild trauma, such as falling off a bed or from standing height, and the other half were caused by moderate trauma, such as falling off a bike or down the stairs.

The researchers found that the children in the mild trauma group had weaker bones and reduced bone quality compared to children without fractures. Their forearm bones could take less pressure before breaking. They had a thinner outer bone layer (cortical bone), as well as weaker spongy (trabecular) bone—the tissue that is found inside the cavity of the bone. Moreover, these deficits were found in other skeletal areas and were not specific to just the forearm. In contrast, the children in the moderate trauma group did not have any significant differences in bone quality compared to children without fractures.

"Even the strongest bone will break if it is subjected to enough force," said Dr. Khosla. "A bone that breaks under mild stress is a cause for concern. Children with fractures related to minor trauma may benefit from lifestyle or nutritional interventions designed to improve their bone health."

The study also raises the question of whether bone deficiencies in childhood persist throughout life. The investigators concluded that additional research is needed to determine if childhood bone weakness can lead to an increased risk for osteoporosis and related fractures in adulthood and the senior years.