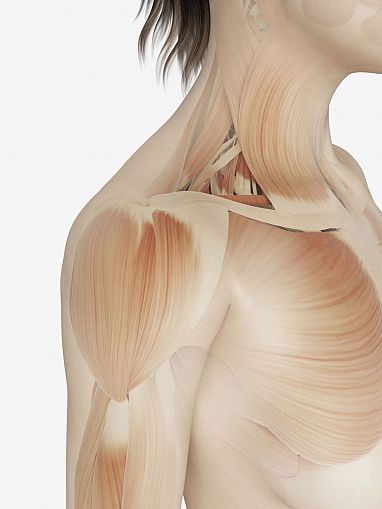 A Stat3 inhibitor improved muscle repair in mice. The results suggest a potential approach to treating muscle-wasting diseases in people.
Follow this link for the full story:
Controlling Muscle Repair

When skeletal muscle becomes damaged, the regeneration process involves a specialized population of cells called satellite cells. These cells normally lie dormant inside adult muscle. In response to injury or exercise, they become active and divide. Some satellite cells mature to replace the damaged muscle tissue, while others serve to replenish the pool of cells available for future repair.

Following sustained cycles of repair, which occurs with aging and in muscle wasting diseases like muscular dystrophy, the normal regenerative process becomes impaired. This is thought to be due to a decline in the number and function of satellite cells.

A team led by Dr. Alessandra Sacco at the Sanford-Burnham Medical Research Institute set out to explore the causes of satellite cell impairment and depletion. The research was funded in part by NIH’s National Institute of Arthritis and Musculoskeletal and Skin Diseases (NIAMS). Results appeared online on September 7, 2014, in Nature Medicine.

Several muscle wasting conditions are characterized by chronic inflammation and activation of immune system molecules such as STAT3 (signal transducer and activator of transcription 3). The scientists found that when they induced muscle regeneration in mice, satellite cells were activated, and this was accompanied by activation of the mouse protein Stat3.

In a series of experiments, the team went on to decipher the role of Stat3. This protein signals satellite cells to become, or differentiate, into mature muscle cells. The choice between self-renewal and differentiation creates a fine balance between maintaining a pool of satellite cells for future repairs and making muscle cells for current tissue repair. Manipulating the timing of Stat3 signals affects this balance.

To see whether Stat3 might be a potential therapeutic target, the group analyzed models of impaired muscle regeneration. Inhibiting Stat3 in the regenerating muscles of aged mice accelerated tissue repair. In a mouse model of severe muscular dystrophy, in which muscle tissue undergoes repeated cycles of regeneration and degeneration, weekly treatment with a Stat3 inhibitor for a month improved muscle repair. The team also found that Stat3 inhibition promoted the proliferation of human muscle cells.

“Our study found that by introducing an inhibitor of the Stat3 protein in repeated cycles, we could alternately replenish the pool of satellite cells and promote their differentiation into muscle fibers,” Sacco says. STAT3 inhibitors are already being tested in clinical trials for other conditions such as cancer. With more development, these might be tested in clinical studies to treat muscle wasting.