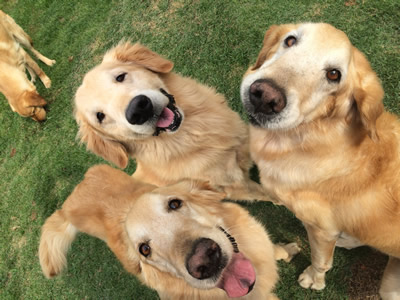 A golden retriever carrying the gene mutation for Duchenne muscular dystrophy (DMD) unexpectedly remained healthy for life, sparking interest in a new avenue of investigation into DMD treatment. The study, which was published in the journal Cell and supported in part by the National Institute of Arthritis and Musculoskeletal and Skin Diseases (NIAMS), revealed that a gene not known to be linked to DMD may hold promise for counteracting the effects of the muscle wasting disease.

DMD is a genetic disorder caused by the absence of dystrophin, a protein involved in maintaining the integrity of muscle. The disease, which primarily affects boys, appears as early as age 3. By the teenage years, most people with the disorder lose the ability to walk. The heart and respiratory muscles are eventually affected, and cardiac and breathing complications result. There is no cure for DMD. Treatments currently under development typically aim to restore dystrophin expression through a variety of means, but to date, no therapies have been found to be effective at modifying the progression of the disease.

The exceptional “escaper” dog known as Ringo lived among a group of dogs in Brazil, all of whom carried the gene defect that causes DMD. Dogs with DMD experience the same symptoms as humans and typically succumb to the disease by around age 2. Ringo never developed the muscle weakness symptoms associated with the disease, and lived to the age of 11. Moreover, Ringo fathered several litters, and one pup named Suflair also escaped DMD, strongly suggesting a protective genetic factor was at play.

Researchers from Boston Children’s Hospital, the Broad Institute of MIT and Harvard, and the University of Sao Paolo in Brazil, set out to determine how Ringo and Suflair lived with fully functioning muscle despite the absence of dystrophin. First author Natassia Vieira, Ph.D., a fellow in the lab of senior author Lou Kunkel, Ph.D., at Boston Children’s Hospital, had previously worked with the dogs in Brazil.

“Genome-wide association studies can help us identify specific regions in the DNA that might be implicated in disease severity,” said Dr. Kunkel, who first discovered the dystrophin gene in the 1980’s. His team used several methods to scan the DNA of the escaper dogs and compare it to the DNA of their severely affected counterparts. All three approaches pointed to the same region of DNA where a mutation resulted in an increase in the expression of a gene called Jagged1, which is unrelated to dystrophin or any of its associated proteins.

To quickly confirm these findings, the researchers turned to a zebrafish model of DMD. The team modified DMD-affected zebrafish to produce higher than normal levels of Jagged1, and found that over-expression of the gene protected the zebrafish against muscle wasting symptoms similar to Ringo and Suflair.

Further analyses showed that Jagged1 likely is involved in cell growth and repair, suggesting that a DMD therapy that stimulates expression of Jagged1 might be able to induce regeneration of specific muscle tissues. The researchers caution that more research is needed to better understand the role of Jagged1 in skeletal muscle development and disease, especially in humans.

“If we can safely increase the expression of Jagged1 in humans affected by DMD, we may have a promising new therapy that could dramatically reduce the symptoms of the disease and prolong the lives of the young people affected by it,” said Dr. Vieira. For now, the researchers are collaborating with the pharmaceutical industry to screen for drugs that may stimulate Jagged1 expression in humans.

This work was supported by NIAMS (grant number R01AR064300) and the NIH’s Eunice Kennedy Shriver National Institute of Child Health and Human Development (P30HD018655). Additional support was provided by the Duchenne Research Fund, the Bernard F. and Alva B. Gimbel Foundation, the Swedish Research Council, and the Muscular Dystrophy Association.