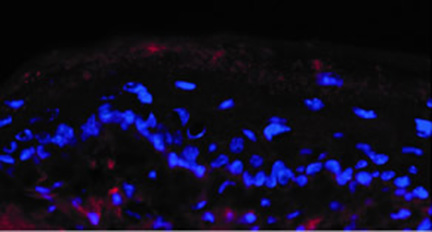 A new study, funded in part by the NIH’s National Institute of Arthritis and Musculoskeletal and Skin Diseases (NIAMS), has shown that engineered T cells can destroy antibody-producing cells that underlie a rare autoimmune disorder of the skin. The findings, which appeared in the journal Science, offer a new strategy for treating the disease, pemphigus vulgaris (PV), and possibly certain other autoimmune conditions as well.

PV occurs when the immune system, which normally protects the body, attacks normal proteins that link cells to one another in the skin’s outer layer. Without these tethers, the cells separate, resulting in chronic blistering of the skin and mucous membranes. PV is treated with medicines that broadly suppress immune system functions, but these therapies can bring heightened susceptibility to infections and cancer. To avoid these side-effects, scientists need to develop new medicines that target only the part of the immune system that causes disease, while leaving the rest intact.

Taking a step toward this goal, researchers led by Aimee S. Payne, M.D., Ph.D., and Michael C. Milone, M.D., Ph.D., of the University of Pennsylvania School of Medicine, borrowed from a strategy for treating cancer that was first described in the 1980s. The anti-cancer approach, which has shown promise in combating certain leukemias and lymphomas, involves reprogramming immune cells called killer T cells to destroy malignant cells, while passing over normal, healthy cells.

Earlier work on PV showed that the disease occurs when immune cells called B cells generate antibodies that target an adhesion protein in skin called desmoglein (Dsg3). Setting their sights on these B cells, Dr. Payne’s and Dr. Milone’s teams engineered killer T cells that recognize and destroy them. Killer T cells function through surface receptors, which, upon recognizing specific proteins on other cells—usually virus-infected or tumor cells—transmit a signal to the T cell’s interior. This signal triggers the release of molecules called cytokines that bring on the destruction of the potentially dangerous cells.

In order to single out the disease-causing B cells, the researchers engineered T cells to make an artificial version of the receptor that includes a segment of the Dsg3 protein. They theorized that the Dsg3 fragment would serve as a decoy, luring in the B cells and setting off the signal that unleashes the T cells’ destructive attack.

After testing several variants of the T cell receptor construct, the researchers succeeded in creating engineered T cells that efficiently destroyed cultured anti-Dsg3 antibody-producing B cells, including those obtained from PV patients. In addition, the reprogrammed T cells proved effective in treating PV in mice, preventing blistering and other signs of autoimmunity, with no evidence of side effects.

"The ability to specifically target cells that cause autoimmunity while sparing the rest of the immune system has long been a goal among investigators who study autoimmune diseases," said Dr. Payne. "Our work provides a proof of concept for an approach that could serve as the basis for the development of new medicines with fewer side effects for treating PV, as well as other autoimmune conditions."

In the future, Dr. Payne and Dr. Milone aim to test their approach on other types of autoimmune diseases, as well as on the immune rejection that can occur following organ transplant surgery.