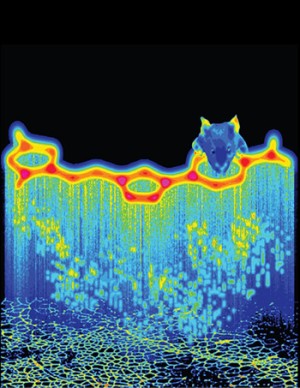 A mouse hanging on a wire during a test of muscle strength. Mice with a mutant dystrophin gene, which have a muscular dystrophy-like disease, can only hang for about 20 seconds before they lose their grip and fall to the ground. An antisense oligonucleotide being developed to treat the disease in people only helps a little bit. But if the mice also receive the drug dantrolene (shown as the wire),

A readily available medication may be able to safely enhance the effects of a promising experimental treatment for Duchenne muscular dystrophy (DMD), according to research partially funded by the National Institute of Arthritis and Musculoskeletal and Skin Diseases, a part of the National Institutes of Health. DMD is a fatal genetic disease in which muscles, including the heart, deteriorate in early life. The study, which was supported in part by funds from the American Recovery and Reinvestment Act, was recently published in the journal Science Translational Medicine.

DMD, a disease that predominantly affects boys, occurs when a genetic mutation leads to an absence of the vital protein dystrophin. Without dystrophin, muscle fibers break down rapidly and cannot repair themselves. Children with DMD become wheelchair-dependent in their teens and usually do not live beyond early adult years.

One approach currently being tested for DMD entails antisense oligonucleotides (AOs), compounds that can restore limited amounts of dystrophin by bypassing the gene mutation associated with a lack of dystrophin—a process known as "exon skipping." However, AOs may not restore enough dystrophin to noticeably improve muscle function among those affected by DMD.

In an effort to improve on AO therapy, Stanley F. Nelson and M. Carrie Miceli, of the University of California, Los Angeles, and colleagues, examined 300 compounds, and found one—a drug called dantrolene—that showed promise. Dantrolene is a muscle relaxant commonly used to treat malignant hyperthermia, a genetic condition in which general anesthesia triggers severe muscle contractions and fever in some people. It is also sometimes used to treat conditions of muscle spasticity, such as cerebral palsy or multiple sclerosis. When dantrolene was combined with a low dose of AO in mice that lack dystrophin, exon skipping was enhanced, almost to the level achieved with a higher dose of AO alone. This resulted in the production of more dystrophin in key muscle groups, and therefore improved muscle function. In addition, the mice that were treated with dantrolene and the low dose of AOs were able to hang on a wire for 50 percent longer than mice treated with the low dose of AOs alone.

The researchers tested several other drugs that have similar pharmacological effects as dantrolene and found that they also improved AO performance. All of these compounds target the ryanodine receptor, a protein that regulates the release of calcium in the muscle, and therefore allows for normal muscle contraction. Although it is not yet certain whether the drugs are having an effect on calcium release or another function of the ryanodine receptor, the findings do suggest that ryanodine-targeting drugs may help improve therapy for children with DMD.