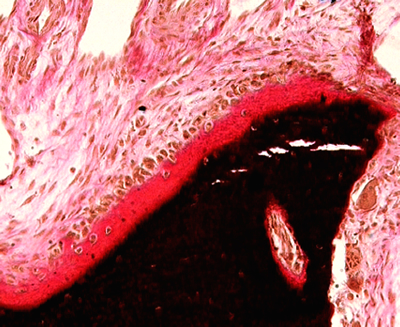 In patients with neurofibromatosis, osteoblasts (bone cells) lay down a collagen matrix that is not able to properly mineralize (red, Van Gieson staining) because of over-accumulation of pyrophosphate.
Credit Florent Elefteriou, Ph.D., Vanderbilt Universit

Correcting an imbalance between two key molecules in bone-producing cells shows promise for improving bone health in a rare genetic disease that affects skeletal integrity, according to research in mice that was funded in part by the NIH’s National Institute of Arthritis and Musculoskeletal and Skin Diseases (NIAMS). The study was published in Nature Medicine.

The disease, called neurofibromatosis, is a genetic disorder that usually appears in childhood. Children with neurofibromatosis typically have tumors that grow along nerves, or on or underneath the skin. These tumors can result in hearing or vision loss, cognitive deficits, and pain. Skeletal abnormalities also occur, including curvature of the spine (scoliosis); malformation of the skull, leg and back bones; low bone mineral density; and a predisposition to bone fractures that typically do not heal well. The condition often leads to severe disability.

"To prevent fractures, these patients often are fit with a brace as early in life as possible, until the skeleton matures," said study author Florent Elefteriou, Ph.D., of Vanderbilt University. "We wanted to explore other potential treatment options, but first we needed to better understand how the disease affects the skeleton."

The most common form of neurofibromatosis is caused by mutations in the NF1 gene, which encodes a protein called neurofibromin. To study how the disease affects the bones, scientists bred mice that lack the Nf1 gene in cells that produce bone and cartilage. In these mice, cells without the Nf1 gene produced too much of a substance called pyrophosphate, which is essentially two phosphate molecules joined together. Phosphate by itself promotes bone mineralization, but pyrophosphate is known to inhibit the process. The mice also had too little of an enzyme called alkaline phosphate (ALP), which acts to split pyrophosphate into two phosphate molecules, and therefore maintain balance.

"Mineralization is required for bone to harden. The imbalance between pyrophosphate and ALP may explain why some skeletal malformations occur in neurofibromatosis, as well as why bone fractures tend not to heal properly in these patients," said Elefteriou.

The mice lacking the gene were then treated with a synthetic form of ALP, called asfotase-alpha, and subsequently showed improved mineralization and bone structure. Mice that were given the synthetic ALP since birth grew larger than their untreated counterparts, and exhibited a significant increase in bone mineral density, as well. Notably, asfotase-alpha has already shown promise in treating a condition characterized by an ALP-deficiency known as hypophosphatasia.

"As we consider the use of asfotase-alpha to improve skeletal health in patients with neurofibromatosis, it is important to remember that the drug cannot correct a pre-existing mineralization deficiency, so treatment would have to be initiated early on. In addition, new methods to identify children at risk for the disease need to be developed," cautioned Elefteriou. "We need to better understand all the cellular defects found in bone cells lacking NF1, both in mice and humans, and we will need to determine the long-term effects of the drug on bone mass and strength over time," he concluded.

This work was supported in part by NIAMS (grant number R01AR055966) and by the U.S. Army, the Children’s Tumor Foundation, the Pediatric Orthopaedic Society of North America and the Texas Scottish Rite Hospital for Children.