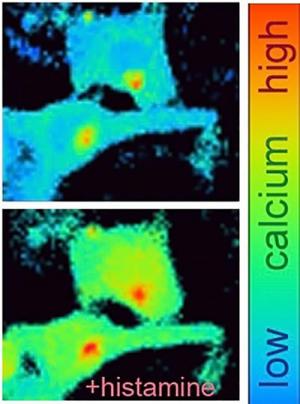 Skin cell of a mouse shows the flow of calcium into the cell in response to histamine (lower panel). An ion channel called TRPV4 is the beginning of a chain of messages that signals "itch" to the brain.
Credit Yong Chen, Ph.D. and Wolfgang Liedtke, M.D., Ph.D., Duke University.

Two independent teams of investigators funded in part by the NIH’s National Institute of Arthritis and Musculoskeletal and Skin Diseases (NIAMS) have discovered that a molecule called TRPV4 plays a role in sensing itch. The researchers found that TRPV4 responds to certain itch-inducing substances by sending a signal to the brain, where sensations are "felt." The findings, which were reported in the Journal of Investigative Dermatology and the Journal of Biological Chemistry, suggest that targeting TRPV4 could be an effective strategy for treating certain skin conditions.

Millions of Americans experience chronic itch stemming from conditions like psoriasis and eczema, or from taking certain medications. As with other sensations such as pain, heat or pressure, itch is transmitted by nerve cells from the affected site to the brain. However, the exact mechanisms by which this process occurs are not well understood.

Earlier work had implicated a particular family of ion channels—molecules that allow the passage of charged particles into or out of the cell—in many senses, including vision, smell and hearing. Certain members of this family, dubbed the TRP (transient receptor potential) ion channels, had been found to be involved in sensing pain and itch.

In particular, the ion channel TRPV4 has been linked to the pain and inflammation associated with sunburns, but its role in other sensations was unclear. Pain and itch are thought to be transmitted through related pathways, suggesting that the channel may convey itch signals, as well. In addition, TRPV4 gene activity goes up in itchy skin scarred by burns or irritated by UV light, further suggesting a role in itch.

To investigate the possibility, a team led by Earl E. Carstens, Ph.D., a neurobiologist at the University of California, Davis, tested the effect of four itch-provoking substances injected into skin of mice engineered to lack the TRPV4 gene. They found that the mice scratched less in response to one of these substances, serotonin, compared to control mice that had an intact TRPV4 gene. Serotonin is a neurotransmitter frequently associated with mood, but it functions in many other ways in the body as well, and is a potent stimulator of itch.

The scientists saw the same results when they blocked the channel’s activity in mice using a chemical inhibitor. Mice that were systemically pre-treated with the inhibitor scratched less in response to serotonin compared to mice with active TRPV4, confirming that the channel is involved in serotonin-induced itch.

Next, the researchers examined the effect of serotonin on cultured sensory nerve cells. When activated, the TRPV4 channel opens and allows calcium to flow into the cell, triggering a cascade of biochemical reactions that ultimately conveys a signal to the brain. They found that when they chemically inactivated TRPV4 in these cells or deleted the gene, there was a more modest calcium influx in response to serotonin, further implicating TRPV4 in the serotonin signaling pathway.

"We’ve known for some time that serotonin is a powerful itch inducer, but the molecular mechanisms through which it works have been unclear," said Dr. Carstens. "Now that we’ve identified TRPV4 as a key player, we can begin to develop therapies that target the molecule and possibly bring relief to the millions of people who experience debilitating itch."

In the second study, researchers led by Wolfgang B. Liedtke, M.D., Ph.D., a practicing neurologist and investigator at Duke University who first described TRPV4 16 years ago, addressed the role played by TRPV4 in skin cells in sensing itch. Although skin is thought to serve primarily as a protective barrier between our bodies and the external environment, previous research by Liedtke’s team showed that skin cells—not just the neurons within skin—can also play a sensory role. Their earlier work in mice revealed that skin cell TRPV4 is involved in sensing UVB rays, which cause the tissue injury and pain associated with sunburn. This discovery led them to wonder if TRPV4 in skin cells plays a role in itch, as well.

To find out, his team used the same mice they had engineered for the sunburn study—animals that lack TRPV4 only in keratinocytes, the major cell type of skin’s outer layer—and injected several itch-inducing compounds into their skin. They found that the mice scratched less compared to controls in response to histamine, a natural molecule that causes the itchiness of bug bites and some allergies.

The researchers next sought to uncover the signaling mechanisms triggered by histamine in skin cells. They found that the itch-inducer triggered calcium entry through TRPV4 in cultured human or mouse keratinocytes, resulting in activation of an enzyme called ERK. Inhibitors of TRPV4 or ERK, when applied topically to skin in mice, quelled histamine-induced scratching, suggesting that these or similar compounds could be developed into medicines to alleviate histamine-related itch.

By uncovering components of the molecular pathways that control itch, these studies provide the foundation for developing novel treatments for a variety of skin conditions.

"For many decades, we thought that skin’s primary function was to act as a barrier, but now increasing evidence points to a role in detecting sensations as well," said Dr. Liedtke, who sees patients with pathological itch caused by nerve damage or other neurological conditions. "We can now begin to investigate topical therapeutic interventions that target pain or itch pathways in skin, enabling us to sidestep systemic therapies that are burdened with serious side effects."