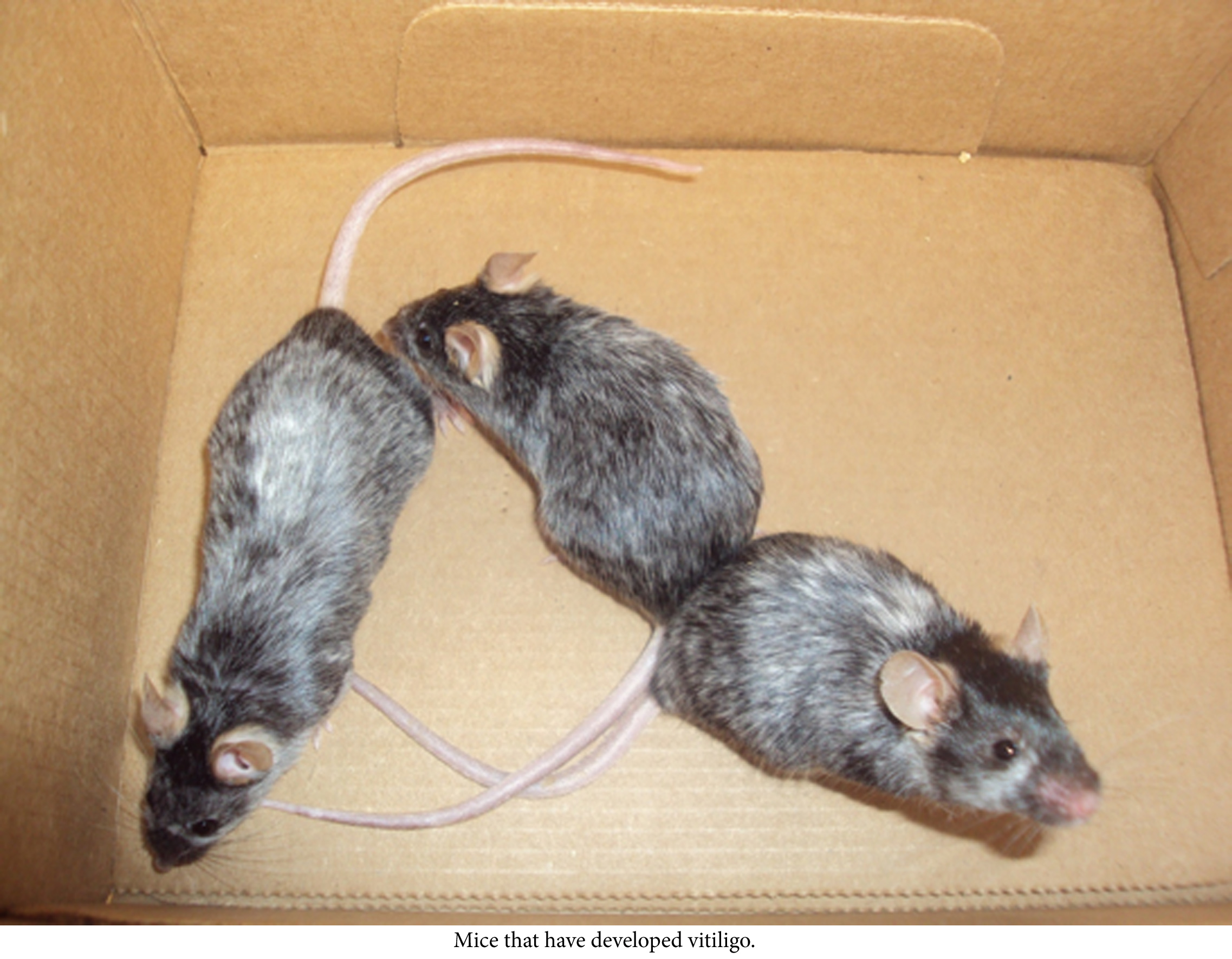 Altering a key protein involved in the development of vitiligo may protect against—or even reverse—the pigmentation loss associated with the skin disorder in mice, according to recent research funded by the NIH’s National Institute of Arthritis and Musculoskeletal and Skin Diseases, and published in the journal Science Translational Medicine.

Vitiligo is a progressive autoimmune disease in which the skin cells that impart color (melanocytes) are destroyed, resulting in white patches on the face, hands and other parts of the body. Scientists are unsure what causes vitiligo. They are investigating the biological mechanisms that trigger the disease, as well as its genetic architecture, and why some people may be more susceptible to it than others. The disease also may be associated with other autoimmune diseases, pernicious anemia, an overactive thyroid gland, or eye inflammation.

Currently, there are no treatments for vitiligo that work over the long term, and most existing treatments have undesirable side effects. Some steroid creams can temporarily return color to affected skin, but the creams can thin the skin and cause streaks and lines. Light therapy also may be used, but it can result in sunburns or other serious side effects. Skin grafts for severe cases can be painful and expensive. No existing therapies can prevent vitiligo from progressing.

“Vitiligo may primarily affect a person’s skin, but the disfigurement that results can lead to emotional and psychological complications,” said lead investigator I. Caroline Le Poole, Ph.D., of Loyola University Chicago. “There is a real need for a safe, effective, long-term solution for the condition.”Previous research has shown that heat shock protein 70 (HSP70) plays a role in the immune response that causes vitiligo by activating inflammatory dendritic cells, a type of immune cell. Heat shock proteins generally are triggered by sudden excessive heat or stress.

Le Poole and colleagues modified HSP70 by altering one of its amino acids, or building blocks. They then administered the mutated protein (HSP70i) as a vaccine to mice that were genetically engineered to eventually develop vitiligo, and to mice that had already begun to lose pigment. They found that the vitiligo-prone mice did not develop the disorder at all, and 76 percent of normal pigment returned among the vitiligo-affected mice, essentially reversing the disease. The researchers theorized that mutating the protein may avert the inflammatory dendritic cells, and instead switch them to a non-inflammatory state.

In the same study, vitiligo-affected human skin samples also showed promising responses to the vaccine, strongly suggesting that HSP70i plays a key role in driving the immune response in human tissues as well. “Although it remains to be seen if this approach could be safe and have a positive impact on human patients with active disease, our study provides preclinical evidence that a modified HSP70i may be one strategy for reversing the effects of vitiligo,” concluded Dr. Le Poole. She and her colleagues eventually intend to test the treatment in human clinical trials.