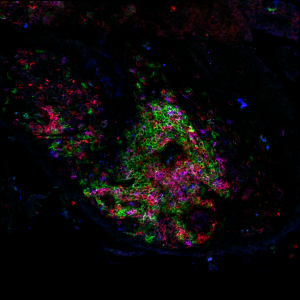 A new study, funded in part by the NIH’s National Institute of Arthritis and Musculoskeletal and Skin Diseases (NIAMS), has uncovered an immune cell subtype that is prevalent in the joints of people with rheumatoid arthritis (RA). The newly discovered cells have unique properties that enable them to migrate to inflamed joints and collaborate with other cells to promote an immune attack. The findings, which appeared in the journal Nature, provide novel insight into the molecular causes of the disease and offer potential strategies for developing more precise therapies.

RA involves chronic inflammation of the joints, resulting in progressive loss of joint tissue and mobility. While the causes are complex and not fully understood, it is known to be an autoimmune disease—a disorder in which the immune system, which normally protects the body, mistakenly attacks the body’s own tissues. Despite lacking a cure for RA, there are effective treatments that reduce inflammation and pain. However, most therapies block the immune system in broad ways, which can cause side-effects and long-term complications.

B cells are the immune system’s antibody-producing cells. In two thirds of people with RA, these cells generate autoantibodies, which attack normal bodily proteins. T helper cells, which stimulate B cells, are also known to play a role, but the exact T helper cell subtypes involved have been unclear. A better characterization of these cells could reveal ways to target the harmful components of the immune response while sparing the rest, thereby reducing the adverse effects of non-specific immunosuppressive therapies.

To advance this effort, a team led by Michael B. Brenner, M.D., and Deepak Rao, M.D., Ph.D., of the Brigham and Women’s Hospital, Boston, used sophisticated analytical techniques to examine cells taken from the joints of people with RA. These methods enabled them to discern molecules on cells’ surfaces and measure gene activities, leading the team to identify a unique cell population, termed T peripheral helper (Tph) cells. These cells were found at high levels in RA patients, representing about 25 percent of all T helper cells in their joints. Tph cell frequency was also elevated in patients’ blood, with the highest levels in those with active disease.

Their analysis also revealed that Tph cells are programmed to migrate to sites of inflammation and to stimulate B cell antibody production. Confirming Tph cells’ role, the researchers showed that Tph cells taken from patients’ joints or bloodstream stimulate cultured B cells to multiply and produce antibodies.

This study has revealed a population of T cells that displays a unique capacity to infiltrate inflamed joints and drive B cell responses within the tissue. Further studies are needed to test whether selective targeting of Tph cells can block production of autoantibodies and dampen the associated inflammatory response.

“While the newest therapies for RA have helped transform our ability to treat the disease, they are relatively broad in their blocking or depleting effects, difficult to use in combination and are associated with immunosuppression,” said Dr. Brenner. “There is still an unmet need for therapies that are more precise and target only the relevant pathological immune cells.”

In future work, the researchers plan to pursue the possibility that Tph cells could serve as a therapeutic target for RA, as well as examine the signals that promote the cells’ development. In addition, they will investigate whether Tph cells play a role in other autoimmune diseases involving autoantibodies, such as lupus and type 1 diabetes.