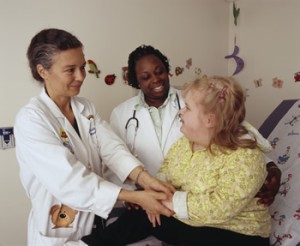 Raphaela T. Goldbach-Mansky, M.D., M.H.S., (left) with a NOMID patient, assisted by Nicole Plass, R.N., B.S.N., M.P.A., LCDR, U.S. Public Health Service. Her studies in patients with NOMID have demonstrated the pivotal role of interleukin-1 beta oversecretion in the inflammatory manifestations of this disease. The overlap of clinical symptoms has led scientists to study the role of interleukin-1 i

Prompted in part by a successful clinical trial conducted at the National Institutes of Health (NIH), the U.S. Food and Drug Administration (FDA) recently approved the use of anakinra (Kineret) for treating the signs and symptoms of a rare but debilitating disease called neonatal-onset multisystem inflammatory disease (NOMID). The disease strikes within the first weeks of life and, if left untreated, can lead to hearing and vision loss, cognitive impairment and physical disability. Anakinra, originally FDA-approved for the treatment of rheumatoid arthritis, is the first FDA-approved treatment for NOMID.

The approval comes in response to an application from the Swedish Orphan Biovitrum (Sobi), an international company focused on developing treatments for rare diseases, particularly inflammatory and genetic disorders.

Sobi filed the application after Dr. Raphaela Goldbach-Mansky of NIH’s National Institute of Arthritis and Musculoskeletal and Skin Diseases (NIAMS) and colleagues found in a clinical trial that the drug was able to improve disease symptoms including rash, joint pain and headaches. When study participants took it at sufficiently high doses, it also suppressed the persistent inflammation associated with the disease, and therefore curbed the progression of organ damage.

Data from this study also indicated that young patients who had not yet experienced inflammation-related hearing loss, vision loss or central nervous system damage were able to avoid significant organ damage for up to three years—the time of follow up on the study. Although more data are needed to confirm these findings, the researchers suggested that treatment early in life—before organ damage occurs—may confer maximum benefit.

NOMID affects numerous organs and body systems, including the skin, joints, eyes and central nervous system. It results when an immune system protein called interleukin-1 is overproduced. Prolonged inflammation in multiple organ systems causes irreversible damage and loss of function. Up to 20 percent of untreated children with NOMID do not live to adulthood.