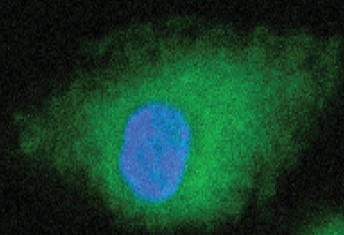 A new study in mice has uncovered a role for a protein called TREML4 in spurring an inflammatory pathway linked to the development of systemic lupus erythematosus (SLE). The research, which was funded in part by the NIH’s National Institute of Arthritis and Musculoskeletal and Skin Diseases (NIAMS), suggests that TREML4 could be a promising drug target for SLE. The findings appeared recently in the journal Nature Immunology.

SLE, or lupus, is an autoimmune disease in which the immune system mistakenly attacks its own tissues and organs, causing inflammation. The symptoms vary, but the most common ones are sore, swollen joints, muscle aches and fatigue. Over time, lupus can damage the body’s organs and cause serious problems like kidney disease or cardiovascular disease.

Immune suppressants are used to control the disease, but these medicines can have serious side effects, such as increased susceptibility to infection and cancer. If scientists could find ways to dampen specific pathways without affecting the immune system as a whole, they might be able to alleviate symptoms while avoiding the worst side effects.

With this goal in mind, a team of scientists led by Terry K. Means, Ph.D., of the Massachusetts General Hospital Division of Rheumatology, Allergy, and Immunology, focused on an inflammatory pathway controlled by a cellular receptor called TLR7. When TLR7 detects the presence of an invader such as a virus, it sets off an inflammatory cascade aimed at quelling the infection. But in some cases, TLR7 mistakes normal human molecules for pathogenic ones, triggering autoimmune diseases. Earlier work had linked excessive activation of TLR7 to lupus in both people and mice.

In an effort to identify molecules that modulate the TLR7 pathway’s activity, the researchers screened more than 8,000 proteins. They found that one of these, TREML4, a receptor found on certain types of immune cells, amplifies the effects of the TLR7 pathway. Compared to normal mice, mice engineered to lack TREML4 produced lower levels of inflammatory molecules in response to TLR7 activation. This result suggested that blocking TREML4 could reduce inflammation and possibly lessen its harmful effects in lupus.

To test the effect of TREML4 on the disease, the researchers used a strain of mice genetically inclined to develop an autoimmune disease similar to lupus, including prolonged activation of the immune system, inflammation and kidney damage.

These lupus-prone mice, when engineered to lack TREML4, produced markedly lower levels of inflammatory molecules than their TREML4-producing littermates. In addition, they were partially protected from lupus-associated kidney failure, and survived significantly longer.

The discovery of TREML4’s role in amplifying the TLR7 pathway and in modulating lupus symptoms in mice will enable scientists to specifically target the molecule in efforts to develop new ways to treat the disease.

“Only one new drug for treating lupus has been approved in the last 50 years, so there is a pressing need for new medicines,” said Dr. Means. “The identification of TREML4’s role in lupus represents a significant step forward, because it could lead to the development of new medicines that are more specific and less toxic to patients.”

This work was supported by NIAMS (grants K01-AR051367 and K01-AR066716). The NIH’s National Institute of Allergy and Infectious Diseases (grants R01-AI084884, U24-AI082660 and T32-AI007061) and National Institute of Diabetes and Digestive and Kidney Diseases (grant F32-DK097891) also supported the study. Additional support came from the Lupus Research Institute, the Alliance for Lupus Research, and the American Society of Nephrology.