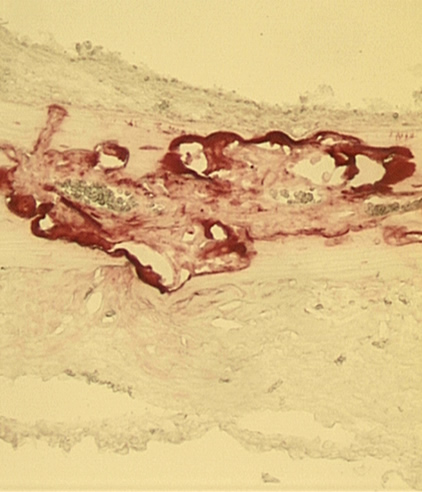 Investigators supported in part by the NIH’s National Institute of Arthritis and Musculoskeletal and Skin Diseases (NIAMS) have shown how a protein called RBP-J controls a pathway that promotes bone degradation, a common complication of rheumatoid arthritis. The study also revealed that decreased levels of RBP-J are linked to the disease and could partly underlie the associated bone loss. The findings, which appeared in the Journal of Clinical Investigation, suggest that targeting the RBP-J pathway could be an effective strategy for preserving bone in people with rheumatoid arthritis.

Rheumatoid arthritis is an autoimmune disorder in which the body’s immune system mistakenly attacks the joints, creating inflammation. This results in chronic pain and swelling in the joints. Organs such as the bones, heart and lungs may be affected, as well. There is no cure for rheumatoid arthritis, but medicines that dampen the immune response are used to help ease the symptoms.

In healthy people, bone degradation and bone formation occur in tandem, working together to respond to the body’s needs while maintaining healthy bones. But in people with rheumatoid arthritis, bone degradation often outpaces formation, leading to fragile bones that are prone to fractures.

Although inflammation is known to play a part in bone erosion by increasing the production of osteoclasts, a type of cell that breaks down bone, scientists have been uncertain exactly how inflammatory molecules trigger the development of these cells.

To gain a better understanding of the process, researchers led by Baohong Zhao, Ph.D., assistant professor at the Weill Medical College of Cornell University and assistant scientist at the Hospital for Special Surgery, focused on a protein called RBP-J. Earlier work in Dr. Zhao’s lab had shown that RBP-J was involved in suppressing the formation of osteoclasts and restraining bone erosion. Osteoclast maturation and activity are regulated by a complicated network of signaling pathways that fine-tune the rate and degree of bone degradation. Dr. Zhao’s team wondered if RBP-J controlled this process by interacting with a pathway named RANK, another pathway named ITAM, or both.

This suggests that RBP-J functions like a block in the ITAM pathway, and much like releasing the brake sets a car on a hill in motion, removal of RBP-J enables the ITAM pathway to proceed.

When they injected TNF? into the lining of the mice’s bones, they saw more osteoclasts and greater bone erosion in RBP-J-deficient mice than in controls. These findings suggested that elevated levels of inflammatory molecules such as TNF?, a hallmark of rheumatoid arthritis, when coupled with RBP-J deficiency, could aggravate the bone destruction that can occur with the disease.

To assess if RBP-J deficiency is associated with rheumatoid arthritis, the investigators next compared RBP-J levels in osteoclast precursor cells from rheumatoid arthritis patients and healthy individuals. They saw significantly less RBP-J in the patients’ cells than in controls. This finding, together with genetic studies that linked certain variants of RBP-J to rheumatoid arthritis susceptibility, suggests that RBP-J could be a key factor in the disease.

"We’ve shown that in rheumatoid arthritis, decreased levels of RBP-J set the stage for the bone destruction experienced by people with the disease," said Dr. Zhao. "In the future, by targeting RBP-J or other components of the ITAM pathway, we may be able to preserve bone health in people with rheumatoid arthritis or other inflammatory bone diseases."

This work was supported by grants from the NIH, including NIAMS grant R00-AR062047 to Baohong Zhao.