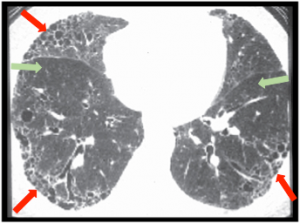 Researchers have linked a small signaling molecule to pulmonary dysfunction in systemic sclerosis (scleroderma), a chronic autoimmune disease, according to a study funded in part by the NIH’s National Institute of Arthritis and Musculoskeletal and Skin Diseases (NIAMS). The findings, which appeared in Arthritis & Rheumatology, suggest that the molecule, CCL2, could help identify patients at greatest risk of developing pulmonary problems and represents a potential new therapeutic target for the disease.

Scleroderma is characterized by scarring of the skin and internal organs, such as the kidneys, heart and lungs. The disease’s severity and symptoms vary widely, but lung complications, especially those associated with interstitial lung disease (ILD), are among the most serious. The course of ILD is highly variable, so a biomarker that could predict the condition’s progression would enable physicians to individualize patient monitoring and treatment.

“While scleroderma patients have diverse symptoms, pulmonary problems are one of the biggest worries for many of them,” said Sandeep K. Agarwal, M.D., Ph.D., of the Baylor College of Medicine, an author of the paper. “A biomarker that predicts ILD could help us identify and treat high-risk patients aggressively early on, enabling them to stay healthy for longer.”

CCL2 As a Predictive Marker for ILD

Earlier work had already linked several factors, including CCL2, to ILD. But the molecule’s value in predicting long-term ILD outcomes had not been evaluated. The current study addresses this knowledge gap. The researchers leveraged data from two independent studies of scleroderma patients, the Genetics versus Environment in Scleroderma Outcome Study (GENISOS) and the Canadian Scleroderma Research Group (CSRG).

Using state-of-the-art techniques, the researchers compared serum levels of 11 signaling molecules with pulmonary function in 266 GENISOS patients. At the initial visit, early in the course of the disease, the molecules’ levels were measured, along with patients’ pulmonary function. Pulmonary function was assessed annually thereafter for an average of about four years.

They found that CCL2 is a significant predictor of ILD, with higher CCL2 levels forecasting a faster decline in pulmonary function. This result was confirmed using data from the CSRG group, which consisted of 171 patients. The analysis also showed that higher CCL2 levels are associated with higher rates of mortality.

While these results must be validated in future studies, the findings suggest that CCL2 may be a valuable biomarker for predicting severe ILD, and possibly for assessing lung disease progression and response to therapies in scleroderma patients. The findings also support a role for CCL2 as a potential treatment target for this dangerous lung complication.