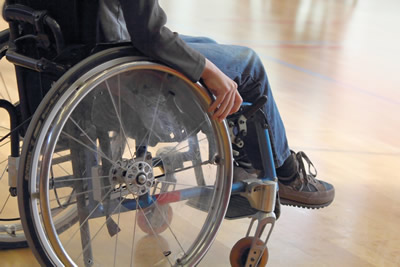 By the teenage years, children with Duchenne muscular dystrophy often can no longer walk.
Credit Shutterstock

Using a large-scale technological approach, a team of researchers has uncovered several dozen proteins that could serve as biomarkers for the muscle wasting disease, Duchenne muscular dystrophy (DMD). This discovery may lead to the development of a biomarker-based blood test that would help doctors assess the status of a patient and the effectiveness of treatment approaches. The study, a collaborative effort that included scientists from academia, industry and patient advocacy groups, was funded in part by the NIH’s National Institute of Arthritis and Musculoskeletal and Skin Diseases (NIAMS), and appeared in the journal the Proceedings of the National Academy of Sciences.

DMD is a genetic disorder characterized by progressive muscle weakness. The onset can occur as early as age 3, and by the teenage years most people with the disorder can no longer walk. The heart and respiratory muscles are eventually affected, and cardiac and breathing complications are a frequent cause of premature death. The disorder primarily affects boys, occurring in about 1 in 3,500 of them worldwide. There is no cure for DMD, and treatment is aimed at controlling the symptoms.

Biochemical indicators, or biomarkers, measured in blood are especially useful for drug development. A number of promising therapies for DMD are currently being investigated, and a sensitive, biomarker-based blood test would enable researchers to rapidly assess how well these approaches are working. In addition, DMD-specific biomarkers would help physicians diagnose DMD and measure the progression of the disease.

In the study, a team of researchers led by Larry Gold, Ph.D., of SomaLogic Inc., and Yetrib Hathout, Ph.D., of the Children’s National Medical Center, analyzed blood samples from 93 DMD patients and 45 age-matched healthy volunteers, aged 2 to 29. The samples were analyzed using a new technology called SOMAscan, which can identify and measure the levels of more than 1,000 proteins simultaneously.

Of the proteins that were increased in DMD patients, 18 were highly elevated in very young children, but tapered off over time as the years progressed, eventually falling to near normal levels. This pattern, which likely reflects muscle cell degeneration that occurs early on in the disorder, suggests that interventions at an early age could significantly preserve muscle function in children with DMD.

In addition to providing potential biomarkers for DMD, the findings, which are being made widely available to the DMD research community, may spur additional investigations that could bring novel biological insights into the disease and reveal new therapeutic targets.

"DMD is a devastating disease, placing an enormous burden on the patient as well as the patient’s family, and we desperately need new ways to treat it," said NIAMS grantee Eric P. Hoffman, Ph.D., of the Children’s National Medical Center, and an author of the paper. "Our work represents an important step forward by identifying blood serum biomarkers that researchers can use to quickly evaluate an experimental approach’s effectiveness, speeding the pace of clinical trials and the arrival of new therapies on the market."