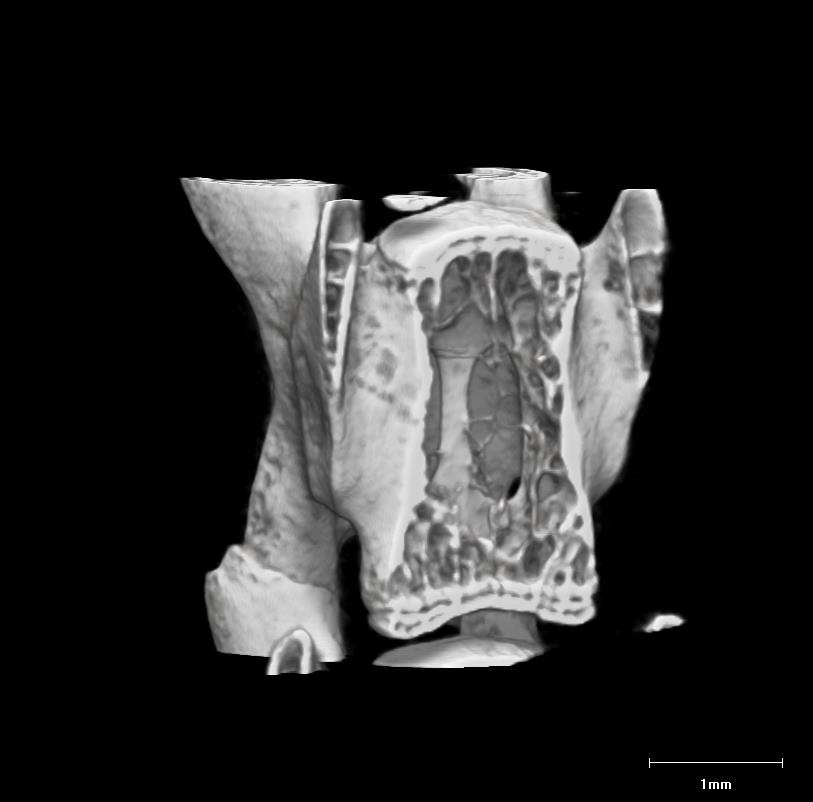 Research funded in part by the National Institute of Arthritis and Musculoskeletal and Skin Diseases (NIAMS) has revealed a connection between excessive activity of a signaling molecule and osteogenesis imperfecta (OI), a genetic disease characterized by fragile bones. Working in mice, the researchers found that TGF-β, a molecule that controls diverse cellular processes, is overly active in two different forms of OI. Blocking the molecule’s activity reversed the bone abnormalities in the diseased mice, offering a possible approach for treating OI. The study appeared in the journal Nature Medicine.

There are several types of OI. They range in severity from a form that is lethal at or shortly after birth, to a milder one with few symptoms. People with OI can have anywhere from a handful to hundreds of bone fractures in their lifetime. The most severe types of OI are associated with lung problems as well, and respiratory failure is the most common cause of death in people with the disease.

There is no cure for OI, so standard treatment aims to reduce the chance of bone fractures and maximize patients’ mobility. Physical therapy and medications can help to strengthen bones, and some patients undergo surgery to implant rods into the long bones, giving them greater support. To improve walking ability and reduce the chances for falling, people with OI sometimes use canes and walkers, or braces to support their legs.

The most common form of OI is caused by mutations in a gene that codes for collagen, an abundant structural component of bone. This type of OI is genetically dominant, meaning a child need only inherit one defective gene from a parent to have the disease.

Other forms of OI are linked to defects in enzymes that help process collagen to its mature form. These types of OI are recessive, and are usually inherited by children whose parents are both carriers of the disease.

Collagen forms a dense network of fibers that creates a scaffold to support the other components of bone, but the defective collagen molecules in people with OI can result in a weak framework that breaks easily.

Other mechanisms may also add to the skeletal abnormalities seen in the disease. Bones are continually remodeled by cells that build and break them down. Previous research has suggested that this remodeling process is amiss in people with OI, possibly contributing to the bone problems typical of the disease.

Curious about this disturbance in bone remodeling, Brendan Lee, M.D., Ph.D., of the Baylor College of Medicine, turned his attention to a signaling molecule called TGF-β, which is present at high levels in bone.

Dr. Lee focused on TGF-β because it was known to help coordinate the activities of cells that form and break down bone. In addition, previous studies had shown that overproduction of TGF-β in mice yielded characteristics typical of OI, like low bone mass and lung problems.

To see if TGF-β played a role in OI, Dr. Lee’s team and other investigators, including NIAMS grantee David Eyre, Ph.D., of the University of Washington, examined the molecule’s activity in mice engineered to have the most common form of the disease—the type caused by defects in the collagen gene.

When they analyzed the bones of these mice, they found elevated TGF-β activity. They saw similar results in mice engineered to have one of the less common forms of OI—one that affects collagen processing. Both types of mice exhibited OI-like skeletal defects.

“The fact that mice with both dominant and recessive types of OI exhibited signs of excessive TGF-β activity suggested that we had identified a common mechanism for the disease,” said Dr. Lee. “Our work supports the idea that TGF-β could be a significant contributor to the disease process.”

The researchers next wondered if blocking TGF-β would reverse the skeletal defects in the mice with OI. To test the idea, they treated both types of OI mice with an antibody that binds to TGF-β and blocks its activity. After eight weeks of treatment, the bone structure appeared to be nearly normal.

The researchers concluded that mutations that cause OI trigger TGF-β over-activation, disrupting the process of bone remodeling and contributing to the skeletal problems that characterize the disease.

“Currently, there are no treatments for OI that are directed at the underlying cause of the disease,” said Dr. Eyre. “Our discovery of TGF-β’s role offers a promising avenue for the development of novel therapeutics that could actually reverse the disease mechanism and improve the health and quality of life of people with OI.”