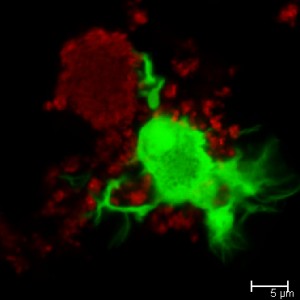 Bacterial communities known as biofilms may play a role in the development of systemic lupus erythematosus (SLE), according to a study conducted in mice and funded in part by the NIH’s National Institute of Arthritis and Musculoskeletal and Skin Diseases (NIAMS). The findings shed light on the role of microorganisms in lupus, and suggest that treating underlying infections may benefit people with the disease. The study appeared in the journal Immunity.

SLE, or lupus, is an autoimmune disease in which the immune system mistakenly attacks its own tissues and organs, causing inflammation. Normally, immune molecules called antibodies attack potentially harmful invaders such as bacteria or viruses, but in lupus, the body produces autoantibodies, a type of protein that target one’s own molecules. Lupus is a chronic condition, with periods of remission alternating with relapses, or flares.

The cause of lupus is unknown, but both genetic and environmental factors are thought to play a role. Infections have been linked to the onset of the disease and to the occurrence of flares, but the exact mechanisms involved have remained elusive.

In the current study, a team of researchers led by Çagla Tükel, Ph.D., and Stefania Gallucci, M.D., both of the Lewis Katz School of Medicine at Temple University, investigated the role of bacterial biofilms in triggering autoimmunity and lupus. Bacteria in biofilms surround themselves in a protective coating, or matrix. The researchers focused on a matrix protein called curli made by certain gut bacteria. Their previous research had shown that curli can activate the immune system and produce inflammation, a hallmark of autoimmune diseases.

To further explore curli’s role in autoimmunity and lupus, the researchers exposed immune cells called dendritic cells to a biofilm of Salmonella Typhimurium, a curli-producing bacterium and a frequent culprit in cases of food poisoning. The cells extended tendrils into the biofilm and began to engulf the bacteria, as they would when faced with an infection in the body.

The researchers also discovered that curli binds tightly to bacterial DNA found in biofilms, forming a potent combination that signals the presence of a threat to the immune system. Dendritic cells responded to a curli-DNA composite by producing high levels of inflammatory molecules such as type 1 interferons, factors known to be involved in lupus.

This result indicates that, in lupus-prone mice, exposure to biofilm components could trigger disease. The researchers also showed that even normal mice made autoantibodies in response to curli-DNA complexes, but at lower levels.

Curli’s role in eliciting autoimmunity was confirmed in the next set of experiments, which involved infecting mice with curli-producing bacteria. The researchers infected mice with bacteria that make curli—either E. coli, which normally inhabits the gut, or Salmonella—and compared the mice’s response to that of mice infected with bacteria that lack curli. They found that the curli-producing bacteria led to higher levels of autoantibodies than bacteria that lacked the protein.

Together, these results show that curli, which is made by several types of bacteria that inhabit or infect the gastrointestinal tract, can promote signs of lupus in both lupus-prone and normal mice. Additional research focused on understanding how biofilm components contribute to autoimmunity may lead to new ways to prevent and treat lupus and related diseases.

"Current therapies for lupus rely heavily on immunosuppressive medications, which add additional health risks and often do not control the tissue damage that lupus inflicts," said NIAMS grantee and author Roberto Caricchio, M.D., of the Lewis Katz School of Medicine at Temple University. "By showing that bacterial biofilm components can promote the development of autoimmunity or worsen it, we’ve suggested that other treatment approaches, such as controlling an underlying infection, may be beneficial."